Budapest has a lot to offer. If you are looking to move to a city that is beautiful, has a rich history and is affordable, then Budapest is the place to be! It is the capital city of Hungary, located in eastern Europe. After reading this blog you will know more about Budapest’s environment, nightlife, culture, public transport, housing, health care and some words to get you started. 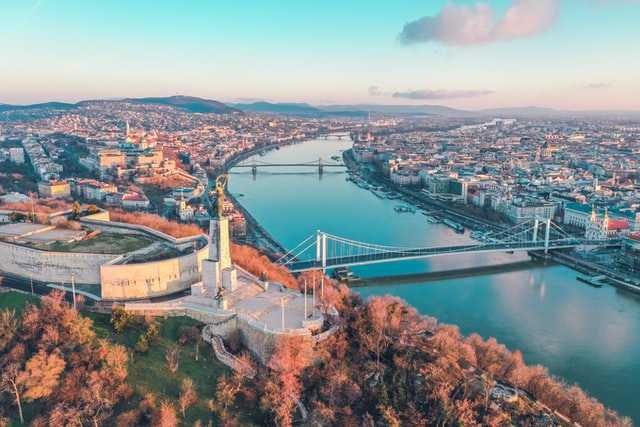 Budapest is located in central Hungary and it is its capital city. The city is an area of 525 square meters and has a population of 1,752,286 people. Budapest was established in 1873, by the unification of the cities Buda, Pest and Óbuda. They were joined together to create a city fit to be the dual capital of the Austro-Hungarian Empire. The Danube separates Buda from Pest and the areas are connected by the chain bridge. 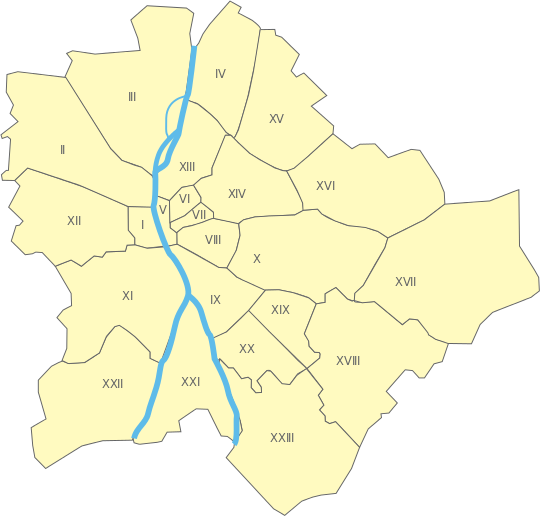 District XI, Újbuda, has the biggest population of all districts with 145.510 people living there. District XVII, Rákosmente, is the largest district with an area of 54.83 square kilometer.

Precipitation
The city has an average annual precipitation of 23,5 inches. On average there are 84 days of precipitation each year in Budapest and in the months May and June you can expect the most rainfall. Snowfall is fairly frequent in the winter months. They have a long summer period from May to mid-September and 1988 hours of sunshine throughout the year.

Hills
As you know by now, Budapest consists of two area’s named Buda and Pest. Pest is a fairly flat area and Buda is quite hilly. The Buda hills were formed in the Triassic Period. The highest point of the hills and of Budapest is János Hill, at 527 meters above sea level. The lowest point is the line of the Danube which is 96 meters above sea level. Budapest is also rich in green areas. Of the 525 square kilometers occupied by the city, 83 square kilometers is green area, park and forest.

Budapest has many beautiful places to visit. If you want to go sightseeing in Budapest you should definitely visit the Hungarian Parliament, the shoes on the Danube bank, the Buda castle, the Chain bridge, Bazilika church, Fisherman’s Bastion, great market hall and Heroes square.

The city is also known for its many thermal springs, it is even named the city of spa’s. Therefore, it is worth checking out Szechenyi baths. This is the most visited and much praised attraction in Budapest. The spa has 18 pools, 10 saunas, several message treatments and more. Budapest also has lovely green places to visit such as Gellért hill and Margaret Island. Gellért hill is located near the Danube in Buda and it is a beautiful viewpoint to see the river and the chain bridge. Margaret island is located in between Buda and Pest in the Danube. The island is known for its water tower, the rose and Japanese garden, the ruins and the musical fountain. 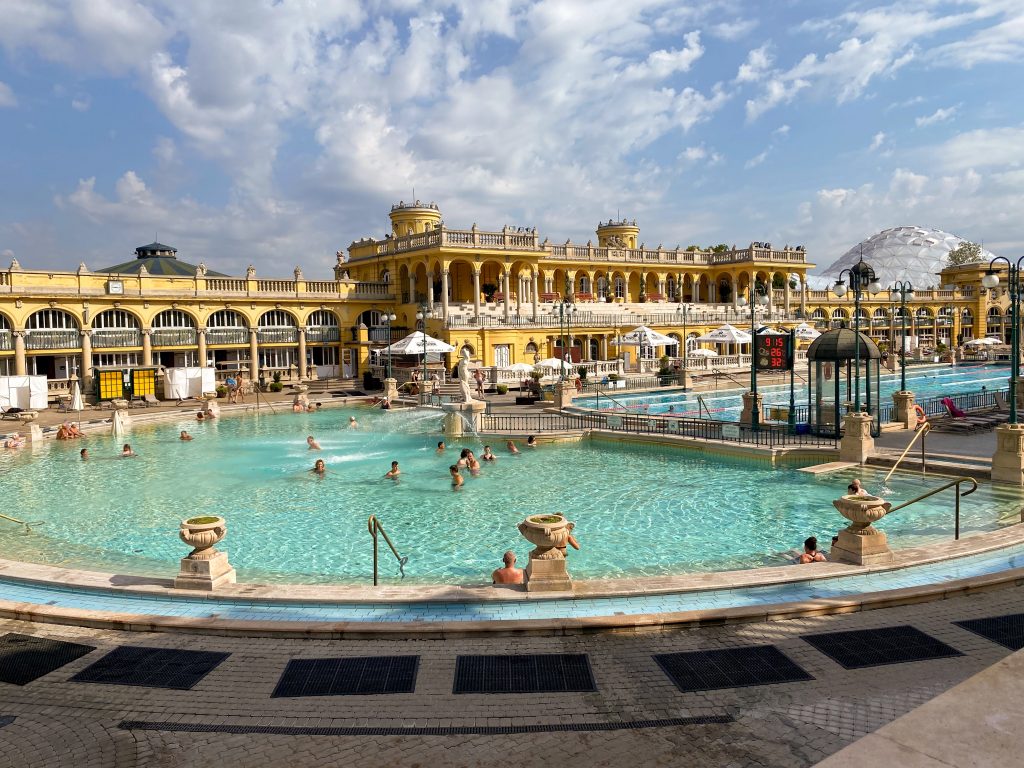 Budapest established its own distinct cuisine based on products from the surrounding region, such as lamb, pork, and regional vegetables. Hungarian cuisine today is a combination of Asian components combined with French, Germanic, Italian, and Slavic elements. Restaurants in Budapest reflect diversity, with menus featuring traditional regional cuisine, fusions of various culinary influences, or cutting-edge new techniques. 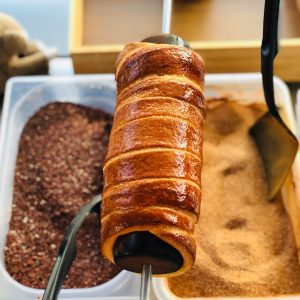 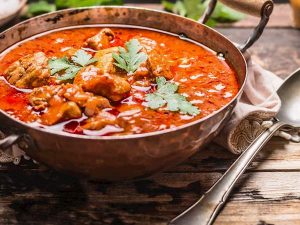 Once you are in Budapest there are a few dishes and snacks that you must try such as Lángos, Kürtőskalács, Gulyás and Paprikás csirke.

Lángos is a deep-fried doughy flatbread that’s eaten warm and slathered with sour cream and grated cheese or with garlicky butter. It is a great savory snack for on the go.

Kürtőskalács (chimney cake) are made from long strips of sugary dough wrapped around spits that are brushed with butter and roasted over charcoal. The sugar caramelizes to form a crispy coating and when the dough is removed from the spit, steam is released from the center like a chimney.

Gulyás (Goulash) is the national dish of Hungary and something you have to try when you are in the capital city. It is a thin broth made from chunks of beef cooked with onions, paprika, tomatoes, and pepper. Another dish you should try in Budapest is Paprikás csirke (Chicken paprikash). It is one of the most popular dishes in Budapest, chicken paprikash is essentially chicken coated in a sour cream sauce.

Quirky ruin bars are Budapest’s most famous nightlife phenomenon. The club Szimpla kert is the most famous club in Budapest and is the center of the nightlife scene.

Instant Fogas Ház is another very popular club in Budapest. Instant is still the biggest ruin bar in Budapest, with two courtyards and eight bars, all of which stay open until 6am, seven nights a week. If you love night-time pool parties, you should also try to go to a sparty (spa-party) at the Szechenyi Baths. Think of a full-on rave in a thermal spa; pumping house music, cocktails and an anything-goes atmosphere.

Finally, the best thing about the nightlife in Budapest is that it is the cheapest destination in Europe to buy alcoholic drinks! 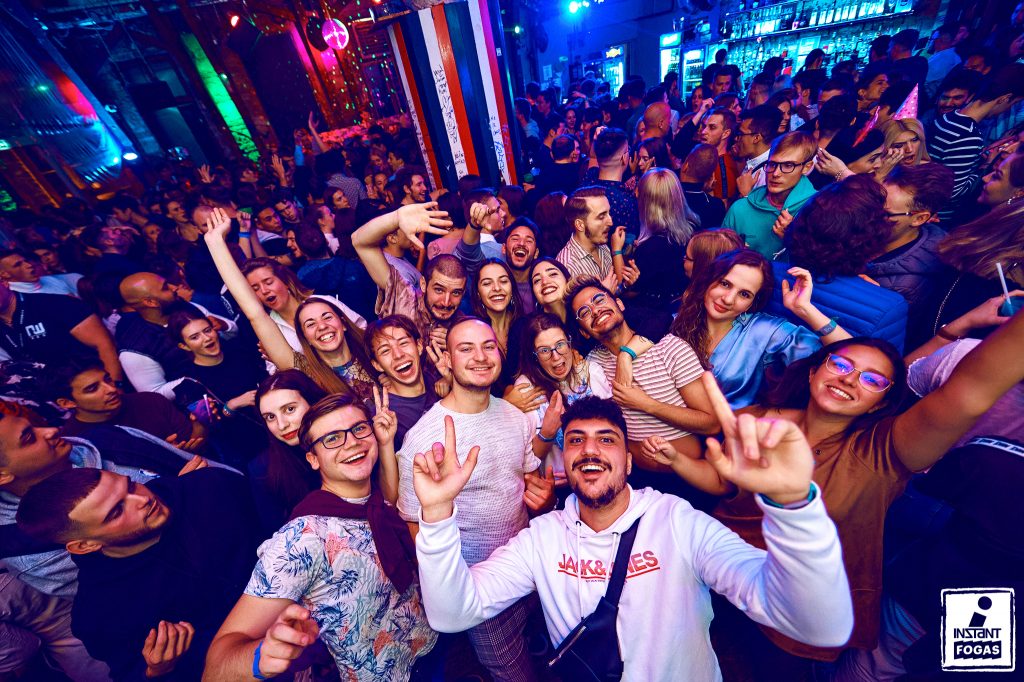 BKK also has an app, where you can plan your journey, buy tickets and find more information about public transport. The name of the app is BudapestGO and it is available for iOS and Android

BKK has an integrated e-ticket system. This means you do not need to buy a different ticket for each mode of transportation. It was implemented to increase the use of public transportation and reduce the use of cars. You can buy tickets on the mobile app for all modes of transport, for a low price. Below you can find the prices of the tickets and passes. 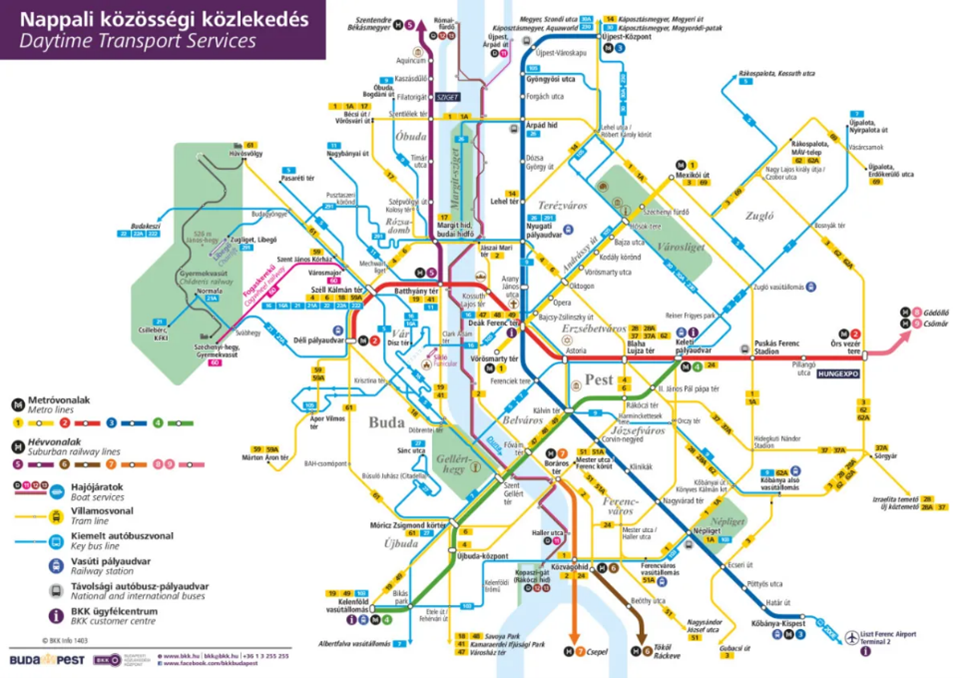 Finding a living space in Budapest will not be a problem. There are lots of websites where you can find apartments and rooms. Additionally, there are Facebook groups where you can search for housing.

Below are some websites to help you look for housing:

The National Health Insurance Fund (Hungarian: Nemzeti Egészségbiztostási Alapkezel (NEAK)) organises a tax-funded universal healthcare system in Hungary. If you are working for a local company in Budapest, you can use Hungary’s public healthcare system, which covers the majority of medical costs.

Many expats use Budapest’s numerous private hospitals and clinics, which provide high-quality medical services and employees who speak English. Basic healthcare is provided free of charge to residents of the European Union (as well as Iceland, Norway, Liechtenstein, and Switzerland). You must have a European Health Insurance Card (EHIC) and a passport or ID to show to the medical personnel. You must have your EHIC before arriving in Hungary, or you have to pay for medical care. Non-emergencies and emergency repatriation are not covered by this basic care.

Below you can find the numbers to call when you have an emergency in Budapest. 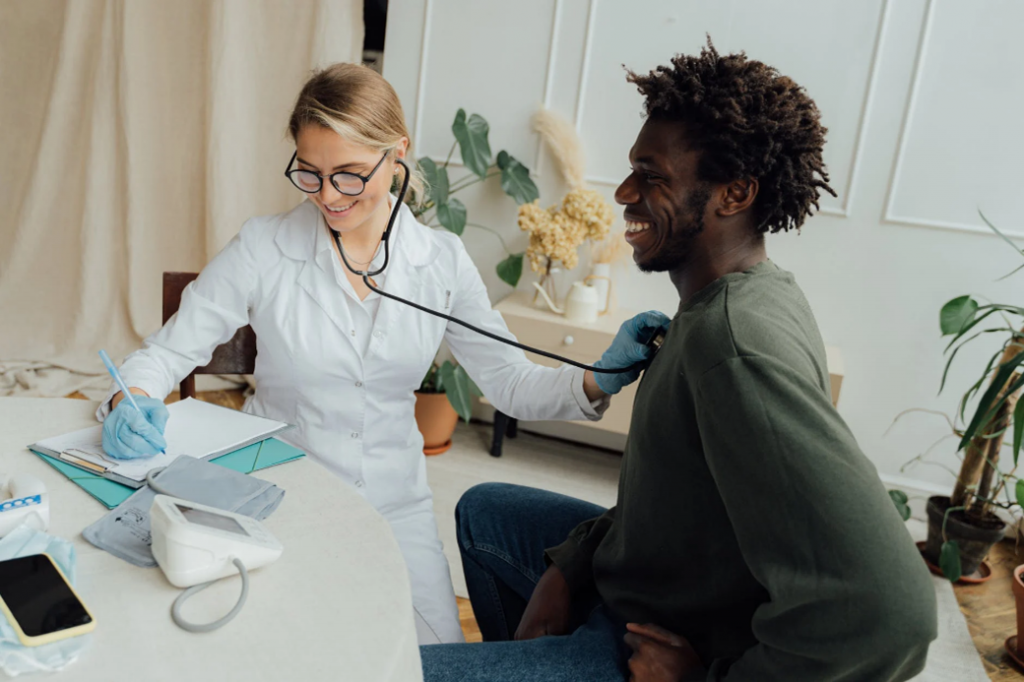 The official language in Hungary is Hungarian. In Budapest you can manage to get around if you speak English. In other parts of Hungary however, most people do not speak English. The overall percentage of English-speaking population in Hungary is only 20%. Therefore, here are some words and sentences to get you started in Budapest😊